So after finishing Pretty Muddy and a cheeky couple of hours out, Sunday is spent recovering not moving off the sofa and enjoying the football on show and catching up on soaps. Feeling very tired, exhausted i think its called. Mum makes a yummy roast just what i need bit of sustinance to try and see me through!!

Early night in store and thats where i stay for the majority of Monday feeling a bit worse for ware!! Nothing necessarily out of the ordinary just usual over doing it a little bit so some catch up on sleep needed!! I manage to get myself up to head to slimming world, not really expecting much considering the week i had and the abundance of pick and mix consumed over the weekend! I maintain that will do, probably fair, off home i head to resume the position that i had got used to that day sprawled out on my bed.

So as the evening goes on I’m still not feeling great but with all optimism, set my alarm for the morning ready for work. Try and get some sleep something i struggle with so as usual check out a bit of 24 hours in A&E!! Feeling a little bit sick throughout and then about 10pm feeling very feverish with a bit of sickness as normal just thinking everything will be okay! Mum comes in about 10:30 after all the noise and coughing, she wants to ring the number as usual i don’t nothing to worry about.

Checking my temperature just to be safe and a little high but the lights still green 🙂 so all good, about 30mins later the thermometer is starting to show orange something it hadn’t done before and my temperature in the 38’s. Ring the number just to be safe and they’ll ring back in a bit to see if it has dropped, no such luck 40mins later it has risen even more. So with much reluctance at about midnight off to A&E we head!! Some sort of infection… was it the mud?!?

Very busy when we arrive, but as usual seeming to know your hospital number and this little emergency card is like a disney fast pass jump the que a little bit! After being assessed, the usual questions and a little move through to the assessment bit. There’s really not much i like about hospitals, but i do enjoy a bit of people watching, who needs 24hours in A&E now its right in front of me.

So after some poking, prodding, stabbing and the 5th attempt they have a drop of blood, wow how thankful am i that i have a port, this twice a week would be a nightmare, apparently i have tiny veins. Don’t get all the blood they need, they reckon they’ll sort this when i get to a ward 🙁 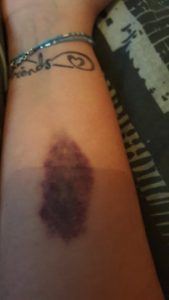