Three weeks ago saw an awesome day and one i was very grateful for. It started off with a trip to Camb Rider with David to complete my CBT (Compulsory Basic Training). The day was awesome and started off with a little test ride in the training area, it appears its not as easy as you first think. Then came a bit of theory and motorcycle safety. Next the road test and yes it was exhilarating, it was also possibly the scariest thing i have ever done. Thats unusual because i very rarely use the word ‘scared’ but on this occasion i was scared at the potential dangers, hitting a rock, get pushed by a bit of wind, let alone the other vehicles on the road. To just go skating without a skateboard down the road with just my body and some denim and a jacket to protect me was an unbelievable feeling. We did both PASS though, so lets see if i decide to experience this again. Another tick off the bucket list 🙂 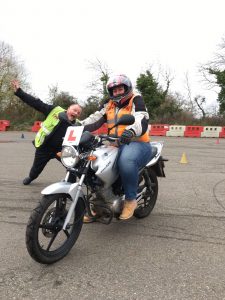 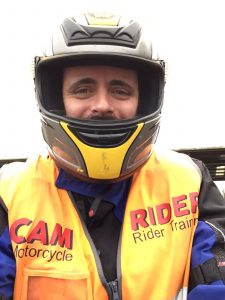 This awesome day was followed by an incredible evening, i was invited and selected as a finalist in the Living Sport Awards held at Burgess Hall, ST Ives. I was nominated for the Jonnie Peacock Award (Click to read the requirements) and much to my surprise i had made it to the final 3!!!

I had refused to read any of the other stories as in my head was ecstatic to make the final and hadn’t even considered being the winner. However, certain people like to wind me up and try and get me to prepare a speech (i don’t like speeches it appears unless I’m very drunk), this isn’t the occasion to get drunk, so i just have a few prosecco’s to try and ease the nerves.

The whole evening was a massive testament to the power of sport and the individuals involved in sport within this county, from fantastic performers to amazing volunteers ( i thought i volunteered a lot, but 400 hours in a year!!). It showed as a county the amazing work of individuals and groups to allow sport to be paramount and allow individuals and communities to thrive. The whole evening was inspiring and made me and i think the others to feel so proud to be involved within sport and the local community.

My nomination had come about after the amazing and continued success of the #kickcancercup and what better way to celebrate that and the nomination by involving the people that have helped and supported me with the running of this event, sorry i couldn’t bring you all, we had limited tickets. 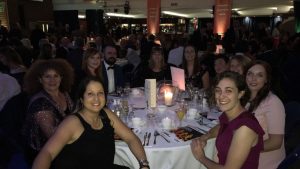 It came round to the awarding of the Jonnie Peacock award (unfortunately Jonnie couldn’t make the night) up steps his mum Linda (what a babe) to present and speak on his behalf. They invited the finalists to meet to the side of the stage as they read the reasons they were nominated (see below). I was stood there with my heart pumping out of my chest listening to incredible stories about two other incredible and inspiring women. As my nomination was read out i thought my heart was going to pop out of my chest but also a massive sense of realisation of what an achievement the event has been, it wasn’t just my friends or footballing world it was people that didn’t know me recognising what an outstanding achievement and event the #kickcancercup has become, long may it continue!!! 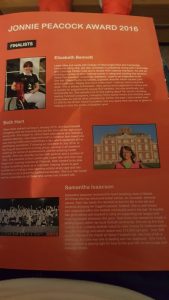 Im sure by this section of the post you already know i WON the Jonnie Peacock award, i didn’t need a speech though just to answer a few questions 🙂 (see video below). Providing an incredible finish to a fantastic event/day and one i am very thankful and proud to have been involved in!! #thisgirlcan 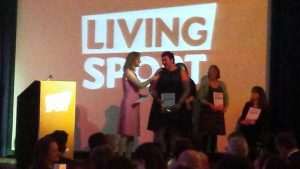 She's only gone and done it!!!! Congratulations Sam Isaacson on winning the Jonnie Peacock Award!! Outstanding achievement and an inspiration to us all! Watch the video here for the golden moment ??? 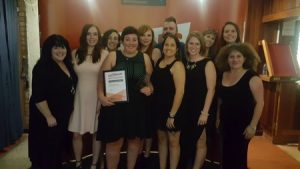