As the weekend went on, some random blisters appeared and taking on and off a hoodie was becoming a bit of a nightmare but all was okay and seemed relatively easy considering a man had spent 3 hours inserting metal bits through an artery in my wrist.

Sunday brought the Isaacson Invitational Cup another brilliant success, massive thanks to all who participated in that and the people that turned out for their yearly football experience. Goals Galore!!! All seemed to be in full working order with just a bit of bruising and swelling but i thought that was expected.

As the week went on that pain began to get worse and whilst sitting with Krissie at the hospital, while she waited for her X-Ray, you wouldn’t have known who needed the X-Ray myself or Krissie. Thankfully Krissie’s X-Ray was all clear and after our little show we watched in X-Ray Department we were off to Football, our last game of the season.

As the day had gone on the pain had got a lot worse and any movement that increased blood flow was making it hurt so armed with a billion painkillers and the advice that no damage was going to be caused by playing, i started the game. This was a very short lived experience as about 5 minutes in when i went to rotate my wrist no more than 90Degrees the pain got worse and i knew that was the end of that. This Pain never really decreased and didn’t settle at all so Wednesday morning meant a trip back up to CAU.

After visit to every area of vascular access it was found that my wrist had decided it was going to host a little party for my platelets and boom there you have it a blood clot, only a few centimetres in my left wrist lol. For some a major worry thinking about surgery and a stay in hospital for Mr Chilled the SIRT guy nothing to worry about just take some paracetamol. 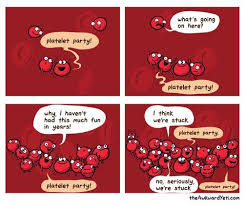 Off i left with some lovely anticoagulant, Dalteparin which is injected into your stomach and helps prevent the formation of blood clots. Armed head to toe with my box full of needles  (enough for 2 x a day for 3 months :()and a massive sharps bin i head home.

After a a month or so the injections became ridiculous and the bruising was insane and causing loads of stomach pain so a switch to rivaroxaban a tablet form of anticoagulent, 1 a day for the next few months.